Egyptian style and design is primarily characterized as ancient, but advanced at the same time, it is due to the feeling that ancient Egyptian technology during their time gave the sensation that it not suited for their era, rather like it was actually a glimpse of their future. This unusual mix of ancient and advanced motif of Egyptian interior design and architecture makes it one of the prominent designs that go out beyond the norms. Egyptian style can be applied to almost any kind of room, the kitchen, living room, dining room, and even in your kid’s rooms. 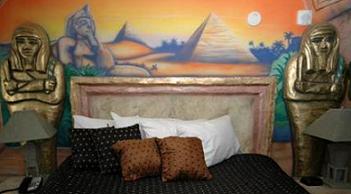 Egyptian interior designs usually represent several iconic articles that are depicted in ancient Egypt. The room’s walls can be given a general design and look of an ancient mural or writings, but these can be quite expensive and takes so much effort to do. Instead of going for ancient murals or wall writings, you can go for something simpler like, reed papyrus themed walls. Walls can easily be painted to look like reed papyrus by going for light yellow and deep brown colors for added detail. It is recommended that you use a stencil with a reed papyrus design etched in it in painting your walls. This way, it becomes much easier and saves a lot of your time to concentrate on other parts of the room to decorate.
About the author

[…] themed carpets are good to use. Another common iconic article that you can use in designing an Egyptian themed room is none other than Egyptian artifacts. Of course, you don’t have to go to Egypt to buy souvenirs […]

[…] help them keep their toys in places. A piece of furniture can change your life; a storage bench for kid’s room can serve 2 purposes at the same time. And it won’t occupy much space as other storage boxes do. […]