How to take care of indoor bamboo

The word bamboo tree is commonly known as a misnomer. Although this ‘tree” can grow several feet into the air like a normal tree, it is not actually a tree. The bamboo is actually a type of grass, grasses that are made up of hard yet hollow “stalks”. These “stalks” are capable of withstanding very strong winds, lessening the impact of the wind by flowing with the wind’s current. This allows the bamboo to live off the strongest typhoons that most actual large trees would have not survived against. Growing bamboo became popular as of late, not as a commercial raw material, but as a decoration on homes. You can even take care of indoor bamboo, and here we are to show you how. 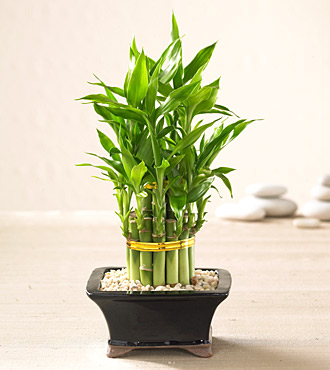 Prepare the substrate or the soil to be use in the indoor bamboo, by mixing several soil types with small rocks and pebbles. Create a mixture that can hold water and nutrients well, but will not hold it long enough for the roots of the bamboo plant to saturate. This is important because, once the soil is unable to remove its water contents over time, the soil becomes saturated, and this can potentially lead to the rotting of the bamboo plant’s roots.

Take a good consideration of the plant’s surroundings when watering the bamboo. Most indoor environments let the soil dry up pretty quickly, so you’ll have to water it a little bit more often, but remember not to overdo watering. If you need a good indicator of this, check out the plant’s leaves. If you see the bamboo plant’s leaves sagging, then that means you’re giving it too much water. If you see the leaves curled up, then that means it is not getting enough and should be given more water.

Indoors usually mean away from any element outdoors. Sometimes, this includes sunlight and ventilation. Do not let this happen to your bamboo plant. Position your bamboo plant somewhere where it can get adequate sunlight. Remember, just adequate, anything too much will eventually harm the plant later on.

Sometimes, to take care of indoor bamboo well, you need to mimic the conditions where the plant’s natural habitat is. Bamboos are native to Eastern Asia. The temperatures in this part of the world can vary widely depending on the season, but is usually either cool or hot enough to maintain humidity. Dew is our keyword here, and one good way to mimic the effect of dew on the plant is by misting it. You can use any kind of fine spray to do this. Mist the plant regularly to mimic its natural habitat, but you should do it at regulated intervals; there is practically no need to do this all the time.

The bamboo plant’s peculiar structure allows it to have its own natural shielding against insects and other pest. However there are occasional times where pests fall upon these gentle plants, so a proper pesticide should be kept for these occasional instances.